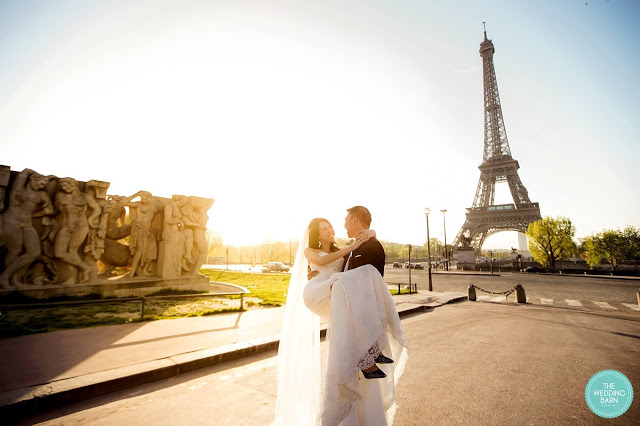 I’ve been told Paris is the most romantic city in the world. Then again I remember my ex-boss telling me he found nothing “romantic” about Paris… it is simply a bustling city full of people. This city is definitely a popular location for pre-wedding photoshoot: Eiffel Tower, the Louvre Museum, Pont des Arts, Notre Dame Cathedral, Palais Garnier (Opera House), etc. I have not been to Paris but would love to experience it for myself one day if love is really flying all over the air of Paris and visit beautiful places like these:

La Tour Eiffel (Eiffel
Tower)
Inaugurated in 1889 for the Universal Exposition, the Eiffel Tower ( La Tour Eiffel in French) was the tallest structure in
the world then until the completion of the Chrysler
Building in 1930. The man behind the Eiffel Tower was engineer Gustave Eiffel. Constructed with a mass of wrought iron, the lattice tower rises 300 meters tall (984 feet), is now an iconic tourist destination in Paris. There is a viewing area up the tower for you to enjoy the spectacular views of Paris. The pre-wed crew can embrace the impressive structure at night in a different way with the lighted tower. It is located at Champ de Mars (a large public greenspace) 7e arrondissement, next to the Seine River. [pre-wedding photography above by The Wedding Barn]
Add: Champs-de-Mars, Paris 75007
Website: http://www.eiffel-tower.com/
Musée du Louvre (the Louvre Museum)
Originally a royal palace, the Louvre became a public museum in 1793 with an exhibition of 537 painting. There are about 35,000 objects on display now, spread out over three wings of the former palace. The museum has a diverse collection mostly of European paintings and sculptures. It also contains Roman, Egyptian, Greek and Oriental art, clocks, furniture, china and tapestries. Some of the most famous works of art in the museum are the Venus of
Milo, the Nike of Samothrake, the Dying Slave by Michelangelo and the most popular of them all; Leonardo da Vinci’s Mona Lisa.
There are three entrances, the main entrance at the glass pyramid, second entrance from the Carrousel du Louvre underground shopping mall and another entrance at the Porte des Lions. The Louvre Pyramid was built by American architect I.M. Pei in 1989. The Louvre museum lies in the heart of Paris on the Right Bank, the place is known as the 1st arrondissement adjacent to the Tuileries Gardens. Use of cameras and video recorders is permitted inside but the use of flashes is forbidden. Take a look at how our talented photographers shot in innovative angles and perspectives.

Pont des Arts
Love Lock Bridge, Paris, France.
Tourists attach love locks with their names written on them to the railing of this pedestrian bridge, then throw the key into the Seine river, as a romantic gesture. Now this practice is discouraged as the bridge can no longer withstand the weight of the locks. Selfies and photoshoots are welcome!

Notre Dame de Paris (Our Lady of Paris in French), also known as Notre Dame Cathedral is an impressive medieval architecture marvel. This cathedral of the Catholic Archdiocese of Paris has a gothic exterior which is full of intricate details, two broad towers and many sweeping arches. The ornate interior is light and airy, with beautiful sculptures and stained glass. Construction started in 1163 and completed in 1330. You are able to capture a better view of the architecture in photos from the Square Jean XXIII Park behind the cathedral.
Website: www.notredamedeparis.fr
Add: 6 Parvis Notre-Dame, Place Jean-Paul II, 75004 Paris, France

Palais Garnier (Opera House)
Palais Garnier was built in 1861, well known for its exceptional opulence. The style is monumental and considered Second-Empire Beaux-Arts with axial symmetry in plan, elaborate multicolored marble friezes, columns, and lavish statuary, many of which portray deities of Greek mythology. It was used as the setting for Gaston Leroux’s 1910 novel The Phantom of the Opera and, the adaptation in Andrew Lloyd Webber’s 1986 musical.


Other attractions and photography spots

The
French Open Tennis Tournament is one of four tournaments called the “Grand Slams” and is played by the best tennis players in the world. It is held in the Roland Garros Stadium Paris. The matches are played on clay.
Sacre-Coeur Paris – The Basilica of the Sacred Heart of Paris Catholic Church is a popular landmark which is located at the summit of the butte Montmartre, the highest point of Paris.
Arc de Triumph is one of the most famous monuments in Paris – to honour those who fought and died for France in the French Revolutionary and the Napoleonic Wars.
Brasseries are restaurants that serve alcoholic beverages, as well as food. A boulevard full of brasseries and European style shops would create a different mood to your pre-wed images.
http://www.wloon.com/2016/01/europe-pre-wedding-paris-to-london-with-love-ck-vindy | Jan 2016 | Make up & styling by Wenxy Khor (wenxykhor.com) | Gowns and suit by Obsidian Wedding Studio